Two Bullets in the Chamber 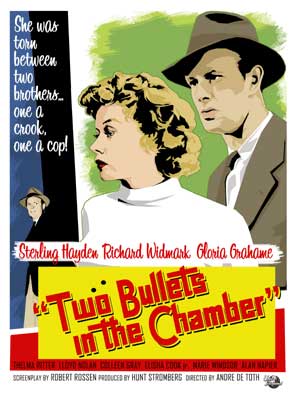 Two Bullets in the Chamber — this movie does not exist, though I wish it did.

It was inspired, of all things, by an audio commentary track for the movie Road House, a 1948 film noir starring Richard Widmark and Ida Lupino.

I love audio commentaries, since I frequently have them on as I work. I can't look at the screen too much, so when I find a movie with a really good commentary track I find myself listening to it over and over. (I think I actually wore out my Superman: The Movie dvd listening to director Richard Donner and screenwriter Tom Mankiewicz talk over it so many times).

Anyway, this movie had commentary by film historians Kim Morgan and Eddie Muller. (I've met Eddie once, and he was an unfailingly nice guy, and his book of film noir posters The Art of Noir even sort of inspired an earlier poster of mine), and the two of them were so fun to listen to, admitting to deeply-held passions for Widmark and Lupino (respectively) that it was like having two really interesting friends sitting with you at a bar, telling you about their favorite movie. And while I enjoyed Road House all by itself, its the commentary track I'm sure I'll be listening to again.

So as I was listening, I got an idea to pair up two legendary film noir stars that (to my knowledge) never did a film together—Sterling Hayden and Richard Widmark—and contrive some sort of early 50s film noir movie that they could star in.

I then came up with the title, and that led me to a plot—two brothers, one a cop, one a crook—in love with the same woman. It practically wrote itself!

Visually, I really tried tamping down all of my flashiest design ideas to make this thing look as period as possible. All told, I'm pretty happy with it, because I think I accomplished that. To me, it looks like the kind of movie that, if it had existed, Morgan and Muller could do a really great commentary track for.