The Film Noir Foundation Video Archive presents an expanding catalog of noir-related video, ranging from exclusive interviews, to NOIR CITY guest appearances, to short films inspired by film noir. Many of the archive's playlists are available on our YouTube channel, and may be shared and embedded on other sites. Check back for new videos which will be added regularly. 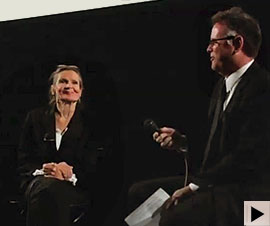 Susan Harrison made her big screen debut in one of the greatest films of the 1950s, Sweet Smell of Success, playing a woman fending off the unwanted "protection" of her overbearing brother, newspaper columnist J.J. Hunsecker (Burt Lancaster). Following a screening of the 1957 noir classic at the Egyptian Theatre in Hollywood, Ms. Harrison sat down for an extended Interviewwith FNF president Eddie Muller, to discuss the landmark film, her tumultuous time in Hollywood, and her decision to leave the industry behind. (2 parts) 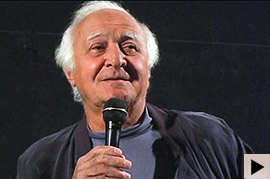 Robert Loggia remains one of Hollywood's most distinguished character actors whose career continues to thrive on movies and television. After a 2007 screening of THE GARMENT JUNGLE (1957) at the Egyptian Theatre, Loggia sat down with Alan K. Rode and revealed what this interesting film might have been instead of what it turned out to be. (3 parts) 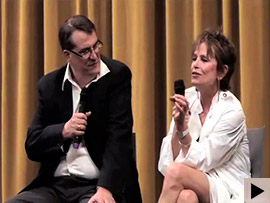 In addition to being one of the most accomplished dancers of her era, Barrie Chase was a superb dramatic actress. In her first public appearance since 1972, Chase joined Alan K. Rode on stage at the Camelot Theatre in Palm Springs after a screening of Cape Fear (1962). Among other highlights, Chase discusses playing opposite Robert Mitchum and her professional and personal relationship with the great Fred Astaire beginning in 1958. (3 parts) 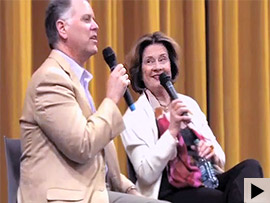 Veteran actress Diane Baker (Marnie, Straightjacket, Silence of the Lambs) discusses her extraordinary career with Eddie Muller following a screening of her 1965 neo-noir Mirage at the 2011 Palm Springs Film Noir Festival. In addition to fascinating backstage anecdotes, the worldly and wise Baker—an executive director of San Francisco's Academy of Art University—offers tremendous insights and inspiration regarding the past and future of filmmaking. (3 parts) 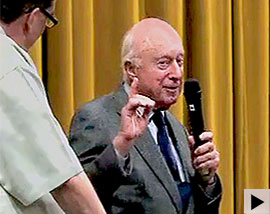 In his 97th year, actor/director/producer Norman Lloyd is the griot of 20th century show business. Drawing from his extensive experiences in the theatre, films and television with Orson Welles, Alfred Hitchcock, Jean Renoir, and Charlie Chaplin et al, there is no more fascinating raconteur than Norman. In May 2011, he joined Alan K. Rode on stage at the Camelot Theatre in Palm Springs after a screening of Saboteur, his screen debut in 1942. (4 parts) 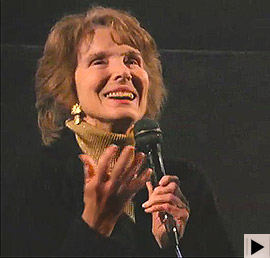 Although principally remembered for fleeing the menacing advances of Gill-Man in The Creature from the Black Lagoon, Julie Adams is one of the last remaining major female movie stars of the 1950s who continues to be a working actress after six decades and counting. In 2009 she discussed co-starring with Tony Curtis and working with director Joe Pevney–among other subjects–with Alan K. Rode after a screening of Six Bridges to Cross (1955) at the NOIR CITY Festival at the Egyptian Theatre in Hollywood. Adams also comments about her first starring role opposite Richard Conte in Hollywood Story (1951) shown at the Egyptian the following year. (4 parts) 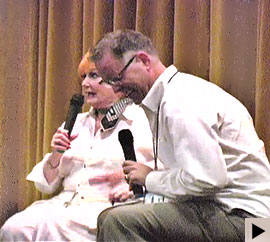 Ann Robinson transitioned from a stunt woman to an accomplished actress best known for starring in the original screen version of The War of the Worlds. Over five decades later, she would be reunited with her 1953 co-star Gene Barry in the Steven Spielberg remake of the classic sci-fi tale. Her lengthy film noir resume includes: I was a Shoplifter, The Damned Don't Cry, The Glass Wall, Bad for Each Other, Dragnet and Julie. The congenial Robinson shares career highlights and anecdotes with Eddie Muller after a screening of The Glass Wall at the 2010 edition of the Arthur Lyons Film Noir Festival in Palm Springs (2 parts) 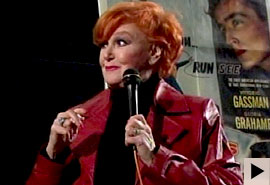 Although Ann Robinson is best remembered for her leading role in the seminal sci-fi classic WAR OF THE WORLDS (1953) her feature credits include appearances films noir including THE DAMNED DON"T CRY (1950), THE GLASS WALL (1953) and DRAGNET (1954). After a 2007 screening of THE GLASS WALL at Hollywood's Egyptian Theatre, the charming actress discussed her life and career with host Alan K. Rode. (3 parts) 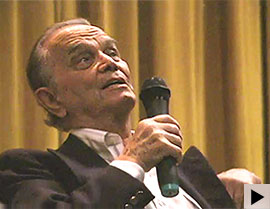 Tommy Cook isn't a household name, but with a screen career dating from 1940 that includes credits such as The Suspect (1944), Cry of the City (1948) and Panic in the Streets (1950) he worked with and knew many of the seminal actors and directors of the classic film noir era. Still active as a producer and a gifted raconteur, Cook regales interviewer Alan K. Rode and an appreciative audience after a screening of Cry of the City at Palm Springs in 2010 (2 parts) 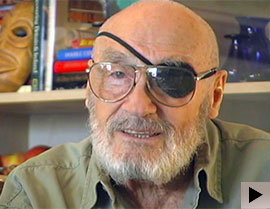 The late Andre de Toth was one of film noir's most distinctive directorial stylists. His artistic élan was responsible for some of the most provocative films produced during the classic noir period including : Dark Waters (1944), Pitfall (1948), Slattery's Hurricane (1949), Crime Wave (1954) and Day of the Outlaw (1959). We believe that this is a "can't-miss," exclusive Interviewof a unique and under-appreciated auteur as filmmaker Patrick Francis captures the essential de Toth: direct, funny, and authentically Andre. (6 parts) 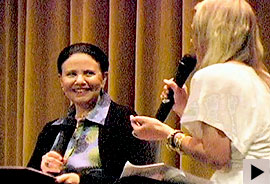 The life of iconic movie star John Garfield is discussed by his daughter, Julie Garfield — a renowned actress and dramatic teacher — with film critic Kim Morgan after a screening of He Ran All the Way (1951) at the Arthur Lyons Film Noir Festival in Palm Springs, California. This intimate Interviewabout the legendary actor whose career was derailed by the Blacklist is a compelling story. (4 parts) 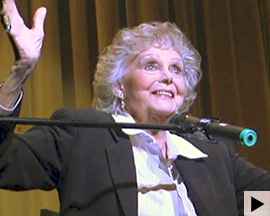 “Interviewed” is an inadequate word to describe this extended on-stage discussion with June Lockhart that encompasses numerous facets of an incredible stage and screen career that began in 1932 and is still going strong. Lockhart talks about growing up in a renowned acting family, working with Anthony Mann and John Alton in Bury Me Dead and T-Men, co-starring with Lassie and includes a riotous reenactment of a Lost in Space episode that has to be seen to be believed! (5 parts) 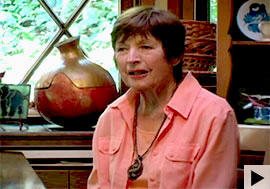 In perhaps her most extensive video Interviewever made, actress Coleen Gray discusses with interviewer Patrick Francis her work with Howard Hawks, Stanley Kubrick and Henry Hathaway. She talks about her collaboration with Eddie Muller on his book Dark City Dames, and shares her feelings about the rediscovery of film noir. (8 parts) 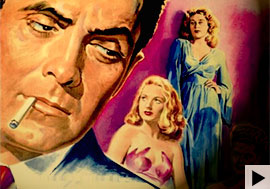 Coleen Gray holds a special place in the noir canon for her role as Molly in the controversial cult classic, Nightmare Alley. Continuing her Interviewwith Patrick Francis, she talks about working with Tyrone Power, director Edmund Goulding, Nightmare Alley author William Lindsay Gresham, and the standing ovation she received at the film's screening at the Los Angeles Cinematheque's. (5 parts) 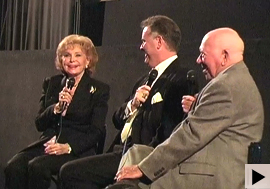 The costars of the 1951 noir classic Cry Danger are reunited to celebrate the film's restoration by the Film Noir Foundation and the UCLA Film & Television Archive. Opening Night of the NOIR CITY: HOLLYWOOD film festival at the Egyptian Theatre, April 2, 2010 (5 parts) 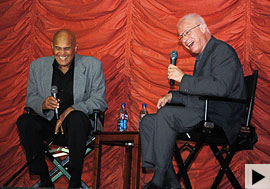 Celebrating the 50th anniversary of Odds Against Tomorrow, the legendary actor-entertainer offers an in-depth look into the production of the 1959 film noir classic, which he both starred in and produced. Recorded at the Music Box Theatre, August 1, 2009, during in inaugural NOIR CITY: CHICAGO film festival. (5 parts) 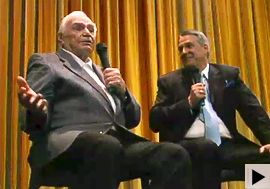 The indefatigable 93-year-old actor recounts much of the majesty and mischief from his long career (including encounters with Robert Siodmak, Spencer Tracy and Burt Lancaster), following a screening of the 1960 crime thriller Pay or Die! at the Arthur Lyon Film Noir Festival in Palm Springs, May 13, 2009. (5 parts) 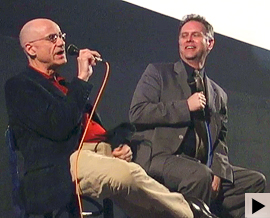 Appearing at the Opening Night of NOIR CITY: HOLLYWOOD, April 7, 2006, writers James Ellroy and Eddie Muller do a live version of the raucous DVD audio commentary they provided for the 1954 film Crime Wave. No interviewer needed … just seat belts. (7 parts) 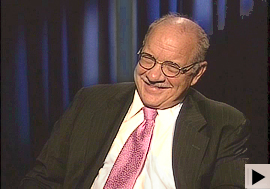 The veteran writer-director (Taxi Driver, Mishima, Affliction) discusses film noir's influence on his work, the state of contemporary moviemaking, his guilty pleasures … and writes his own entry in the Film Encyclopedia. Interviewed in New York, December 4, 2007. (6 parts) 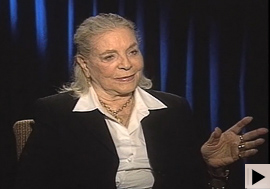 The grand dame discusses some of her favorite films, directors, and her ongoing career in independent films in a conversation with Eddie Muller recorded in New York prior to the release of her 2007 film, The Walker. Edited from a full-length Interviewscreened as part of an American Cinematheque Tribute to the actress. (5 parts) 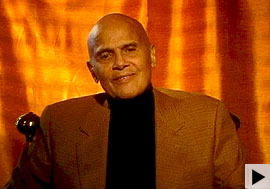 Although he couldn’t attend the festival as originally planned, Harry Belafonte graciously sent a video introduction on the NOIR CITY SAN FRANCISCO screening of his classic noir, Odds Against Tomorrow. 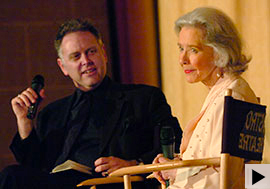 Marsha Hunt at the Castro Theater

The legendary Marsha Hunt on the San Francisco Castro Theatre stage at Noir City 5 in 2007 interviewed by Eddie Muller.