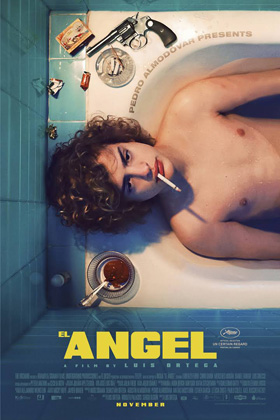 Carlos Robledo Puch, who likes to call himself Charlie Brown, is an impulsive, quick-witted teenager with blond curls and a pouty face that give him a deceptive "pretty boy" appearance. "Deceptive" because Carlitos—one of his other nicknames—is, in fact, a practiced sneak thief and home invader also known as "The Angel of Death." He will not hesitate to kill anyone who stands in his way as he makes the rounds in his hometown of Buenos Aires in the 1970s, the setting for the captivatingly nasty Argentine film El Angel.

Naturally, Carlitos (played to a fare-thee-well by actor Lorenzo Ferro) gravitates toward bad company. His high school buddy Ramón (Chino Darín, son of the great Ricardo Darín), a casual full-time criminal, has a lean, mean, heroin-addicted father (Daniel Fanego) well acquainted with the rackets, and a mother (Mercedes Morán) who sizes up every man she meets with a lascivious leer. They see in the energetic go-getter Carlitos a potential bonanza of cash and swag. He obliges, and their exploits make headlines.

Director Luis Ortega, who wrote the screenplay with Sergio Olguín and Rodolfo Palacios, soft-pedals the easy sociology in his character study of the baby-faced killer. Carlitos' mild-mannered parents (Cecilia Roth and Luis Gnecco) have little or no influence on their bad seed. He simply gets a kick out of walking into an upscale home or gun shop and helping himself to what he fancies. We observe him with his father selling vacuum cleaners in a customer's home—while Papi is busy demonstrating the product, Carlitos is casing the house.

Once they get wind of him, the police are stymied by this middle-class kid's walk on the wild side. They use ridiculous eugenics-style rationales for his behavior ("He doesn't look ugly like a criminal.") But that doesn't prevent them from telling him they'll "electroshock your balls." For his part, Carlitos' raison d'etre might have come from Charles Manson: "Doesn't anyone consider being free?" Compare that to his pal Ramón's romantic justification: "The world belongs to artists and outlaws." Carlitos breaks all the outlaw commandments without a thought of consequences, like the spoiled schoolboy he is.

In the manner of the most satisfying true-crime tales—à la Badlands, Straight Time, etc.—El Angel does not waste much time overly psychologizing its protagonists. They're presented as they are, fully formed and seemingly predestined to end up either dead or sentenced to life behind bars—the real-life Robledo Puch, captured and convicted at age 20, is currently serving his 46th year in prison for murder (eleven of them), kidnapping, rape, and robbery. About Carlitos' dreams and aspirations, his inner life––we learn nothing, aside from the occasional homoerotic encounter and his purely cosmetic enthusiasm for Evita Perón. It's our job as the audience to view him through his actions.

Actors Ferro, Darín, Fanego, Morán, Peter Lanzani (as surly henchman Miguel), William Prociuk (as a crooked art dealer called Federica), and Malena Villa (in a dual role as a pair of twins) fit their parts intrinsically, and the needle-drop music tracks by Moondog, Astor Piazzolla, and Pappo's Blues ring with authenticity. Combined with filmmaker Ortega's cool, anti-analytical descriptiveness, they take us someplace we've never been and show us things we hope to never witness up close. El Angel is the real thing.