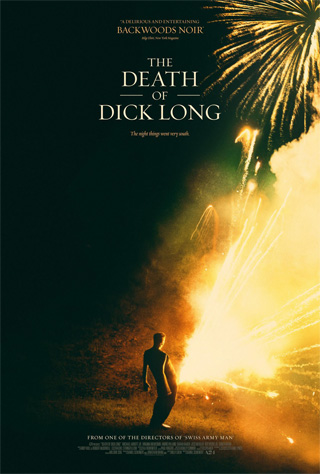 THE DEATH OF DICK LONG

There's something funny about the characters in The Death of Dick Long. Literally. The small-town Alabama garage-band guys are quite probably the dumbest dumbbells you'll see on the big screen this year (against stiff competition).

Zeke (Michael Abbott Jr.) and his best friend Earl (Andre Hyland) hit all the bases for witless underclass foolishness: beer bongs, vaped weed, junk snacks, questionable decorating schemes, vacant facial expressions, and the seeming inability to see further than five minutes ahead in any given situation. Their situation, as the pic opens, is pretty dire.

Late one night when Zeke and Earl and their "classic rock" buddies are "practicing" in somebody's basement, the partying climaxes when the title character (whose face we barely see) winds up dead in the back seat of Zeke's station wagon, covered in blood. Like many other fools in movies, the boys hurriedly decide to dump Dick's body off at a hospital, in their clumsy fashion, and then spend the next day covering up their tracks in ways guaranteed to make an audience squirm.

They try and fail to sink Zeke's bloodstained vehicle in a pond, then later claim the car was stolen. They try to burn or hide other evidence, laughably. Earl, arguably the dimmer of the two, packs up an amazing carload of junk intending to skip town. At home the next morning with his wife Lydia (Virginia Newcomb) and young daughter Cynthia (Poppy Cunningham), Zeke answers every question with a lie and a guilty, hangdog look. The obese local sheriff (Janelle Cochrane) and her bump-on-a-log deputy (Sarah Baker) come to the conclusion the stiff is a murder victim. Hmm… What gave them that idea? Was it the victim's rectal hemorrhaging? The blunt trauma? Or the semen found in his colon?

Filmmaker Daniel Scheinert, co-director of the singularly obtuse Swiss Army Man (2016), assembles a surprisingly strong cast for writer Billy Chew's scenario, a landmark of crude horseplay with echoes of A Simple Plan, Tucker and Dale vs Evil, and countless other let's-make-fun-of-the-hicks pics. But whether we call it mumblecore noir or backwoods noir (as one critic has already done), Scheinert and Chew's poor-dumb-redneck free-for-all is rescued by its players.

Naturally the women are a lot smarter than the men, beginning with little Cynthia checking up on her dad's story after repeatedly being told to go watch TV and not pay attention to mom and dad's arguments. Young actor Cunningham runs away with the movie, closely followed by Newcomb's Lydia, master of the "slow dawn," as opposed to the slow burn – with Jess Weixler (as the unlucky man's widow), Baker's Officer Dudley (shades of Fargo), Sunita Mani (as Earl's perceptive stoner girlfriend Lake), and Cochrane's roly-poly Sheriff Spenser in hot pursuit. Beneath all the white-trash clowning is a tale of mother's love.

Actors Hyland and Abbott – veterans of the standup comedy scene and Jeff Nichols' 2007 "Southern" Shotgun Stories, respectively – take their characters over the top early and often. They roll Chew's dialogue around in their mouths like salted peanuts in a can of Dr. Pepper. Halfway through this guilty pleasure, try to imagine the same characters with completely different accents or speaking a foreign language. Are there real people this stupid? If you have to ask, you should probably consider The Death of Dick Long a documentary. Who killed Dick Long? The answer is part of the word play in the title. The term "death by misadventure" hardly does it justice.