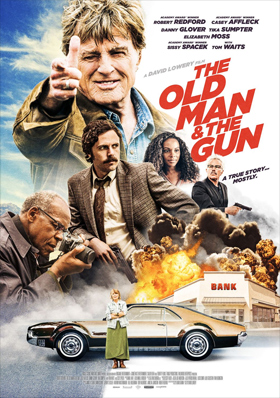 THE OLD MAN AND THE GUN

If The Old Man and the Gun is indeed Robert Redford's final screen appearance, the star of Butch Cassidy and the Sundance Kid at least went out with a film that fits his "nice guy" image like a well-worn trucker jacket. That makes for a neatly symmetrical filmography, but may give fans of Redford's more adventurous acting vehicles—The Natural or All Is Lost, for instance—the feeling that despite the new movie's title, he's leaving with more of a whimper than a bang.

Directed by David Lowery (A Ghost Story) from his adaptation of a feature story in The New Yorker by David Grann (Trial by Fire, Dark Crimes), The Old Man and the Gun has a warm, soft-spoken, halting, decidedly non-urgent time with the "mostly true" story of Forrest Tucker, a bank robber whom we observe in his twilight years, juggling stickups and a senior-citizen romance.

The dude can't help it. When gray-haired "Grandpa Bandit" Forrest (Redford) stops on a Texas freeway in the middle of his getaway from yet another bank job, circa 1981, in order to give a stranded motorist named Jewel (Sissy Spacek) a leisurely ride to her destination, we wince. Of course, they fall in love even though it's a classic mismatch. Jewel is a demure, shy widow, while Forrest is a lifetime felon, in and out of jail since his youth; he's robbed almost as many banks as Willie Sutton, escaped from San Quentin in a prison-built dinghy, etc. Every time Forrest and Jewel go into one of their love chats—in tight close-up, to go along with the grainy '70s-style cinematography—the movie slows down a little more. By the end, it's barely breathing.

Forrest's all-senior crew seems promising, momentarily. Teddy (Danny Glover) is the cautious one, drawing up careful diagrams. The joker of the outfit is Waller (Tom Waits), an impulsive wise mouth with Jim Jarmusch white hair. Their knock overs are easy. Walk in, pass a note, take the cash, walk out. Nice as pie. No one gets hurt. Pursuing cops are baffled. It all drives Forrest's nemesis, Detective John Hunt (Casey Affleck), a little crazy. What drives us crazy is the prison-break montage that gets shunted to the film's last quarter, or the scene in which a car chase devolves into a lyrical interlude of Redford on horseback. The Old Man and the Gun pleads completely innocent of noir.

Three plots in one: the romantic comedy, the bucket-list senior crime spree, and the cop-friendly urban character study. The filmmakers should have chosen Door Number Three. Every crime story needs a nasty personality, someone we're instinctively afraid of. It could have been Waits' nutty Waller. But no, too many nice guys, not enough bastards. The comfy, bouncy music soundtrack offers no help—maybe it's intended to be ironic. Redford, who co-produces, might have picked a less self-congratulatory treatment for his swan song. But then maybe he wants us to never lose sight of his longtime image as the handsome outlaw of love.