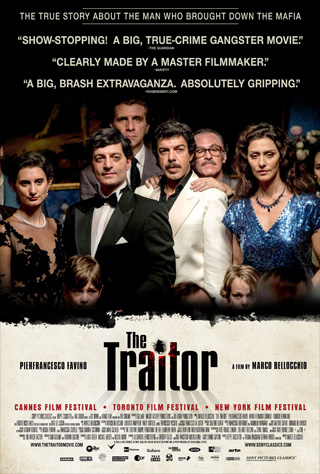 With his thick-set features and solid build, Tommaso "Masino" Buscetta (played by actor Pierfrancesco Favino) looks like the kind of guy who enters silently through an unlocked door and strangles the rival crime boss with his bare hands. You wouldn't want to meet up with this face on a dark street. More to the point of filmmaker Marco Bellocchio's no-nonsense crime saga The Traitor, the real-life Buscetta (he died in 2000) began his career as a fearsome "simple soldier" in the Sicilian Cosa Nostra, specializing in cigarette smuggling and feuding with other mafiosi. That is, before Buscetta cooperated with the Italian government and testified in court against his former "brothers" in 1986-87. The Traitor shows how that happened and why.

Veteran writer-director Bellocchio, whose films (In the Name of the Father, Fists in the Pocket) are better known in his home country than on North American screens, gives the Buscetta story the same damped-down, matter-of-fact treatment that lately is standard operating procedure for films dealing with old-time crime kingpins. As we saw in Martin Scorsese's The Irishman, the violent opportunism of men like Buscetta no longer seems to rate a gaudy, sexy, fast-paced film, with extra-colorful characters performing extra-gruesome murders. The glee has gone out of organized crime movies, The Traitor seems to be telling us.

Bellocchio guides us through Palermo-native Buscetta's criminal acts with careful, methodical pacing, as if he were a prosecutor building a case. Enemies get whacked. Buscetta is tortured by the police and sent to hospital. His brother Vincenzo and his sons Antonio and Benedetto are killed in turf wars. He spends a fairly enjoyable time in prison—in a clean cell with a TV, freshly brewed coffee, a servant who dyes his hair at night, and visits from prostitutes. Buscetta and fellow Cosa Nostra tough guy Salvatore "Totò" Riina (Nicola Cali) develop an adversarial relationship toward each other, mostly because of the murders of Buscetta's family members.

The courtroom scene, in which Buscetta, under the guidance of crusading anti-mafia judge Giovanni Falcone (Fausto Russo Alesi), names names as a state's witness, is a showpiece of overacting—the movie's lone bit of wildness—with angry defendants in cages cursing Buscetta at the top of their lungs, like a captured pack of wolves. It's no surprise when Falcone later meets a grim fate. These two scenes are exclamation points after a fairly tiresome series of courtroom scenes, with only one bit of comic relief. A Cosa Nostra soldier named Salvatore Contorno, who only speaks in Sicilian dialect, confuses the court—none of the judges can understand him.

Otherwise, Bellochio's film is dead serious. Compare and contrast it with one of the 2019's best documentaries, Kim Longinotto's Shooting the Mafia, a profile of Palermo photographer Letizia Battaglia, who has fearlessly depicted her hometown's gangster problem for years and is admired by her fellow citizens for it. The Traitor is a sober indictment of lawlessness and a man who ultimately found no joy in it. Shooting the Mafia is a lusty Sicilian cry for justice.