July 24 2006. Dennis May writes Eddie Muller after the packed-house screening of Mildred Pierce topped by an on-stage appearance of Ann Blyth at the Castro Theater.

I enjoyed your interview of Ann Blyth at the Castro Theatre. And it was great to see Mildred Pierce on the big screen again. I first saw this film on television after school one day in 1965. That’s the day I learned what a lasting impact it had made on my mother, who arrived home from work during the middle of the movie, took one look at the image on the television screen and said, "That’s Mildred Pierce." Then she sat down and was glued to the screen for the rest of the picture. According to her diary from 1945, she saw Mildred Pierce on November 7, 1945. On November 10, she bought a fur coat identical to the one Joan Crawford wears as Mildred.

Mildred Pierce allowed me insight into what made my mother tick. The lives of her generation are reflected in films of that time. For example, my mother filed for divorce from her first husband early in 1945. The divorce was not final at the time she first saw Mildred Pierce and I know this had to be a reason the film made a lasting impression on her. Being divorced in 1945 was a dreadful thing, and my mother was affected the rest of her life by that trauma. She even swore all our relatives to secrecy about it, to keep it from my brother and myself. It wasn’t until I was a teenager that I casually asked her one day if she had ever been married before. Well, she collapsed to the floor in a dead faint! When she came to and I helped her into a chair, she began to cry and confessed her secret to me, explaining how shamed she had been to be a divorcee. She told me on the day she first met my father’s family she was shaking with fear, hoping they would not reject her. Today, people don't comprehend what social pressures our parents and grandparents lived under. That is one reason I enjoy watching old movies, I learn so much about how things have changed so much in a relatively short time. Mid-20th Century culture fascinates me.

After the event Friday night, I briefly spoke to you regarding the beach house used in Mildred Pierce. I had always understood it belonged to Anatole Litvak. I’ve attached a copy of a page from the book, Forties Screen Style, which has a picture of an interior shot of the house with a caption indicating the home belonged to Litvak. Also, attached is a copy of a vintage linen postcard from the 1930s showing the Pacific Coast Highway (then called the Roosevelt Highway) and a beach house, which is unmistakably the house used in Mildred Pierce.

From another source I learned the address was 26652 Latigo Shore Drive, Malibu. Unfortunately, the house no longer exists. I was watching the six o’clock news on television in January of 1983, while I was visiting my mother in Southern California. Strong storms were creating heavy surfs which threatened many beach homes. A reporter was standing in front of this same house, commenting about the fact that it had been used in Mildred Pierce and how it was now in danger. Just as he said that, as if on cue, the house collapsed and crumbled into the sea! I was stunned. I had often tried to locate that house, each time I traveled up the coast highway from L. A., but never picked it out along the now highly developed coastline.

Thanks for a memorable evening with Veda Pierce. 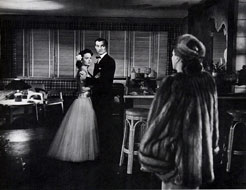 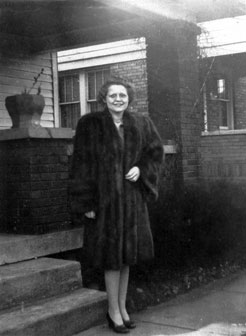 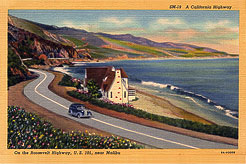