August 23, 2006. A screening of the recently-restored noir thriller, The Window, leads one man to revisit the joys and fears of his Midwest childhood.

As a child in McPherson, Kansas, I always looked forward to Friday night. There was a buzz about the house as we anticipated the evening’s entertainment. When Dad came home, he changed from his Conoco work uniform into his casual slacks and shirt. My brother and I were already dressed in our school clothes, checkered shirts and blue jeans. Mother changed out of the plain-patterned dress she wore for housecleaning and cooking, and into something more “presentable” for an evening out. Our parents always decided what we’d see. We were just excited to be going out and experiencing the thrill of the cinema.

We packed ourselves into our 1952 black Oldsmobile 98 and drove the few blocks to Main Street, parking close to the MAC Theater. The show started at 7:00 p.m. and we always made sure to arrive early, leaving ample time to buy our tickets, get our hot buttered popcorn and drinks, and find four empty seats in the middle section, about ten rows back from the screen. I sat on the aisle because I didn’t want to be squeezed between two people. My parents always sat together and shared a box of popcorn. My younger brother and I each got our own popcorn and soda.

First we watched the Movie Tone News, narrated by Ed Herlihy. Then came a Warner Brothers cartoon, usually “Tom and Jerry,” or “The Road Runner,” then the previews of coming attractions, or “teasers” as Mother called them. Finally, came the feature attraction. We watched Rock Hudson and Doris Day find romance in Pillow Talk. We laughed at Ma and Pa Kettle on the Farm. We were on the edge of our seats when Orson Welles and Joseph Cotton were chasing each other in The Third Man. My parents liked romance and adventure. I cringed at the romantic scenes. They delayed the action and adventure.

One of the movies that made a big impression on me was The Window. In the story, a young boy like myself climbs up the fire escape to sleep outside on a hot New York night. He wakes up in the middle of the night, looks inside the window of his upstairs’ neighbor’s apartment, and witnesses a murder. The boy tells his parents and the police, but nobody will believe him. His parents take him upstairs to apologize to the neighbors. They realize the kid knows, and he must be silenced. The fear it put in the pit of my stomach has stayed with me my whole life. I didn’t remember the villain’s name but the image of his grey hair, greasy face, and penetrating eyes never left my mind.

Bobby Driscoll played the part of the boy. I idolized Bobby Driscoll. I also saw him about the same time in Kidnapped. How did Bobby Driscoll get to be a movie star, I wondered? How did his image get on that screen and in the fan magazines? What would it be like to be famous and have all these people adore you? More importantly, why was Bobby on the screen while I was sitting in the theater? I was envious. I identified with this child star as he avoided the killer’s schemes. I wondered what I would do in the same situation. My heart raced. My eyes were glued to the screen and wanted somebody to believe him before it was too late.

In the late 1960’s I was reading the Seattle Post-Intelligencer and noticed an article about Bobby Driscoll. He was found dead of a drug overdose in a back alley of a street near Broadway in New York City.

In January 2006, The Window was shown on a Sunday afternoon at the San Francisco Film Noir Festival at the Palace of Fine Arts. The Film Noir Foundation had funded a brand new 35mm print of the film. It turned out to be a gorgeously sunny, warm winter day, and I choose to attend this screening instead of enjoying the outdoors, or watching playoff football. I felt it would provide a glimpse at my past and a chance to relive the terror. It also gave me a chance to review my earlier impressions, identify the actors, and see what I’d remembered.

I was not disappointed. Bobbie Driscoll looked exactly as I’d remembered him. The villain who’d haunted me now had a name: Paul Stewart. What I had not remembered were the boy’s parents, played by familiar stars Barbara Hale and Arthur Kennedy. I’d forgotten the ending, in which the murderer, chasing his prey, falls from a beam near the ceiling of a condemned building. The boy is left hanging on the teetering beam, before leaping into the firemen’s net. The scene is terrifying to me even today. I must have “blocked” it from my mind. I wonder if it instilled my fear of heights. 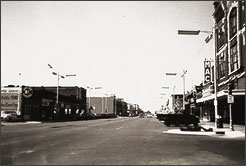 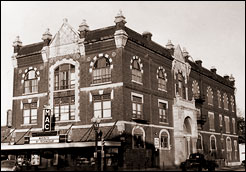 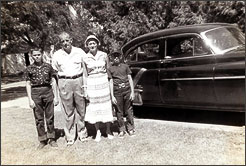 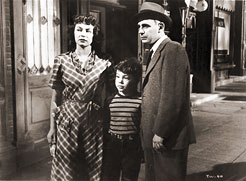 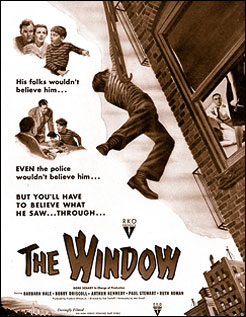