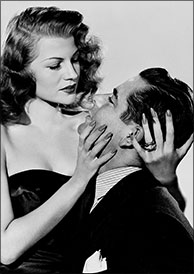 "Let's hate her," Gilda says, toasting the "mystery woman" who ruined Johnny Farrell, her rich new husband's right-hand-man. "Her" could be any woman, of course, or all women. They have little place in Johnny's world, or that of Ballin Mundson, Gilda's casino owner husband, an icy, menacing man. Of course, the locus of that hatred is sitting right there, embracing her combustibility in an act both honest and defiant. Hate me, love me, hurt me, she seems to be saying, with an additional fuck-you thrown in because the "Her" is Gilda herself, and (as it's pointed out twice in the movie) "hate can be a very exciting emotion."

It can also be kinky, and within the world of director Charles Vidor's Gilda that thin line between love and hate provides such ample kink the plot details often feel dressed up for a fetish ball: stiletto switchblade canes, whips, masks, and troublesome zippers. Are these props intended to be so blatantly sadomasochistic? It seems so. As the movie's costume designer, Jean Louis, said of Gilda's iconic strapless black satin gown: "Extreme sexuality in women, hot or cold, is a recipe for catastrophe."

That's not always true. The world occasionally moves along comfortably, even delightfully, with a sexy woman roaming about. But in Gilda, sexuality and love stir up so much anger and confusion that the story ends up taking a back seat to the hopped-up emotions. What is Gilda about? A crooked casino owner, a hood, a gold-digging but vulnerable femme fatale, a Nazi conspiracy, murder and faked death? That's all here, but more memorable and more terrifying are the wrathful, overheated feelings spilling all over the place.

When Gilda tells Johnny, "I hate you so much I would destroy myself to take you down with me," it's so over-the-top (my goodness, these characters hate each other ever so much—you'd almost think they were in love) that it borders on absurd, even comical. But Gilda and Johnny color in their fever-pitched proclamations with nuance and helplessness, they're playing tough but are really fragile tramps, just trying to get through this life. That love makes them insane only shows how human and, in the end, lovable they are. They just don't know how to go about it without being crooked. They love like criminals.

The script, written by Jo Eisinger and Marion Parsonnet (from a story by E.A. Ellington) concerns American Johnny Farrell (Glenn Ford), a drifter and gambler who is discovered by rich, scar-faced Ballin Mundson (George Macready), who just happens to be out walking around the docks in Buenos Aires. Why? One can think of a few reasons. Mundson is conveniently present to rescue Johnny from being robbed, and suggests he visit a certain illegal high-class casino—provided he doesn't behave like the petty thief he clearly is. Once in the joint, Johnny promptly cheats at blackjack and is promptly caught. Who busts him? Mundson.

Mundson swiftly takes Johnny on as an aide de camp, one entrusted with free reign of the business. We can only assume that Mundson is fascinated by this American piece of rough trade. They seem to occupy, and enjoy, an exclusively male world—at least until Mundson introduces Johnny to his luscious new wife, Gilda (Rita Hayworth) and then… everything gets angry. So angry. And twisted. And sexy. And sick. 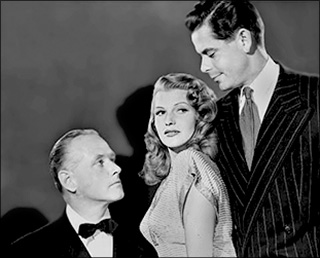 The connection that surfaces between Gilda and Johnny doesn't really bother Mundson (oh, it will eventually). Instead it bonds them, because Gilda and Johnny, as pretty as they are, have nowhere else to go. They seek purpose and escape, whatever and wherever that is, but their two-bit scheming has landed them both in the lap of this grotesque man who seems more obsessed with keeping them than anything else—like two big captive cats. In another movie, Johnny and Gilda would likely hatch a plot to take the Mundson down and nab his money. That would be the spine of the story. But in Gilda, Johnny only watches the woman he desires, making sure she doesn't cheat or misbehave, grabbing her from dance floors and snarling lines like, "Your husband is showing." As much as he love/hates Gilda, he's not going to defy his boss. And as much as Gilda is the classic femme fatale (she sure looks like one), she's not an evil woman. She loves Johnny. And she's hurt. Her vulnerability is gorgeously expressed by Hayworth—you feel for Gilda.

Johnny likes strong-arming Gilda for his boss; it's simultaneous act of humiliation and power. The dance these ex-lovers do around the ménage à trois is almost a sex game that Mundson indulges to keep his debauched boredom at bay. He says he's crazy about Gilda, but also says, "Hate is the only thing that has ever warmed me."

In a curious twist, it's Mundson who fakes his own death (a rather ludicrous plot turn, but one that works within the movie's melodramatics) thereby giving Gilda his riches—with Johnny as executor. Johnny then marries Gilda, but only to control her, which makes her so angry she runs off and tries to get the marriage annulled.

What on earth happened to kindle this kind of contempt in Johnny? We're never told (something about someone walking out on Gilda, for good reasons, we imagine) but it plays out like fiery sex. Neither of these two are going to conduct a rational sit-down and work out their fuming feelings, so they play and play and react and slap and scream and cry and kiss. Given what they putting themselves through, they better have some fantastic make-up sex.

Hayworth and Ford play it with such chemistry; you're taken aback by how powerfully it leaps off the screen. The moment Johnny and Gilda spy each other for the first time in the movie (via Gilda's iconic entrance, throwing her hair back as she answers Ballin's "Gilda are you decent?" with the suggestively uttered: "Me?") her beautiful, beaming face turns to a death stare, and you just wait for the explosion. Is Johnny going to hit her? Make love to her? Instead he walks out, steamed that his former lover is now married to his new boss. "I wanted to go back up into that room and hit her," Johnny intoned in voiceover. "What scared me was that I wanted to hit him too. I wanted to go back and see them together without their seeing me watching. I wanted to know." Hit them? And watch them make love without them knowing? It's a perfectly perverse line—something said by a person who wants to both hate and torture themselves. 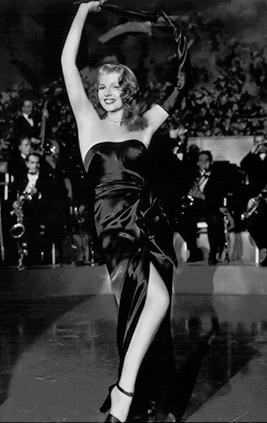 In Gilda's now iconic number "Put the Blame on Mame," Hayworth delivers the sex-bomb highlight of the movie, dancing in that black strapless Jean Louis gown, rolling down her long gloves seductively as she celebrates blaming women for everything (perfect; she's too hard on herself) and starting a strip-tease that delights the audience and infuriates Johnny. It's one of the screen's sexiest screen moments for multiple reasons. Hayworth is outlandishly erotic, yet somehow not crass (the healthy budget and beauty of Rudolph Maté's cinematography help; these characters may be low, but the production is lush). She's also dares to be strong and seductive and assert her power, but with a sadness and vulnerability: she's both lost little lamb and perfidious panther. You care about her.

And in turn, you find yourself caring about Johnny, too. And if the ending seems like a tidy little wrap up, and absurd given all that came before—it doesn't really matter. We should have no confidence that these two will have a happy relationship. When Mundson reappears to take his vengeance on the lovers, we realize he needed to return if only to be removed. He's bad. Not because he's perverse, but because he's unhealthy and this creepy threesome needs to stop. This is no 'Design for Living'. It's a 'Design for Dying'. As Gilda says (in one of the picture's best lines), "You wouldn't think a woman could marry two insane men in one lifetime, now would you?"

Gilda has just been released through the Criterion collection in a new 2K digital restoration. The Blu-ray contains an audio commentary by film critic Richard Schickel, a nice piece featuring filmmakers Martin Scorsese and Baz Luhrman, and an informative, fascinating, and lively interview with noir historian and Film Noir Foundation president Eddie Muller. Also included is an essay by the marvelous writer Sheila O'Malley. Get this Gilda. It's more than "decent."