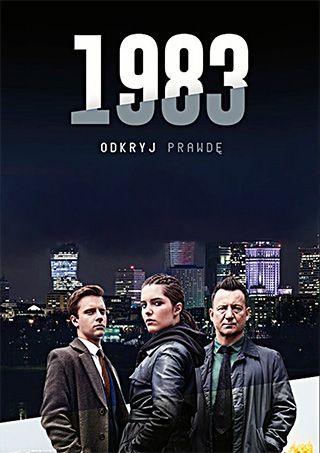 The title of 1983, a murder mystery turned conspiracy thriller from writer/creator Joshua Long, is more than an oblique reference to George Orwell's 1984. Set in a parallel 2003 where the Berlin Wall never fell and the Communist Party has a chokehold on Poland, this alternate history opens on the 20th anniversary of devastating terrorist attacks. The national myth of martyred victims murdered by resistance groups and the necessary guidance of a benevolent government is trotted out in ceremonies celebrating Polish resilience. Katejan (Maciej Musial), a fresh-faced law student orphaned by the attacks and raised on such propaganda, is jolted from his complacency after his mentor, a beloved judge with deep Party ties, posits an unexpected question in his oral exams: what if the attacks didn't backfire at all? What if they accomplished exactly what they were supposed to? When the professor is murdered by one of his students, Katejan starts to question everything he believes.

Party officials paint a glowing picture of a booming economy and growing political power, but life in this totalitarian Poland is anything but rosy. Police detective Anatol Janów; (Robert Więckiewicz) is still being punished for daring to investigate a corrupt party official decades earlier. He grinds out his days confiscating illegal copies of Harry Potter books and rubber-stamping suicide calls, which are suspiciously common for a worker's paradise, until he refuses to let one death go. Where young Musial has the bright-eyed good looks of a rising political star, Więckiewiczk looks like he's endured many a beat down, physically and spiritually. When he discovers his lover is also an informant, trading intelligence for a chance at escaping this oppressive country, he's not shocked, merely disappointed.

Think of it as an Eastern European answer to Amazon Prime's The Man in the High Castle by way of the skewed Cold War tensions of Counterpart, an Iron Curtain noir filmed in a shadowy style recalling Michael Mann and early Ridley Scott. Director Agnieszka Holland sets the tone in the first two episodes: a near-perpetual night; hazy, underlit bureaucratic spaces; claustrophobic apartments; and a cityscape dominated by heavy brutalist Soviet architecture. There's a Little Saigon of noodle joints and cheap storefronts with neon signs that evoke Blade Runner, and a Vietnamese immigrant underclass that mans the government surveillance network like a third- world call center.

You might guess where the story is headed as Katejan reconnects with childhood friend and fellow orphan Ofelia (Michalina Olszanska), who mingles in high-powered social circles but works for the underground resistance, and Anatol is warned to back off by the secret police. You'd be partly right. The show earns its 1984 echo with a government that disappears dissidents and rewrites the historical record, and its Internet-age take on the surveillance state. But the conspiracy itself is more complicated than first appears, and the answers more insidious.