*All times are PT. Please check your local listings to confirm dates and times.

SUNSET BOULEVARD (1950): Film Noir meets Hollywood Gothic meets biting satire in this piece of perfection. A failed, and drowned, screenwriter, William Holden, tells us how he fell into a mercenary romance with a faded silent-film star, Gloria Swanson who probably would have told us a rather different story. sUNAdmirable support provided Erich von Stroheim as Max, her devoted butler and chauffer. Dir. Billy Wilder

THE FALCON’S ADVENTURE (1946): The Falcon (Tom Conway) rescues Louisa Braganza (Madge Meredith) from kidnappers who want her father's secret formula for making diamonds. Her father's murder is pinned on the Falcon and, when they flee to Florida, another murder seems to confirm his guilt. As always, Goldie Locke (Edward Brophy) is there to lend a hand. Dir. William Berke

CLOUDBURST (1952): An ex-resistance fighter, Canadian John Graham (Robert Preston), hunts down the people responsible for the hit and run killing of his wife. Based on a play written by Leo Marks who was a cryptographer for Great Britain’s Special Operations Executive during WWII. Dir. Francis Searle

THE RED HOUSE (1947): In this Southern Gothic noir, young and innocent Meg (Allene Roberts) lives with her Uncle Pete (Edward G. Robinson) and Aunt Ellen (Judtih Anderson) on an isolated farm. When Meg asks her friend Nath to help Pete on the farm, she unwittingly stirs up a tragic past that centers on a mysterious “red house” hidden on her uncle’s property. Miklós Rózsa’s haunting score contributes much to this disturbing thriller. Based on the novel by George Agnew Chamberlain. Dir. Delmer Daves

THE SEVENTH VICTIM (1943): A young woman (Kim Hunter) leaves school to investigate the disappearance of her beautiful and mysterious older sister (Jean Brooks). She finds out some interesting facts, one, her sister was married and two, she was part of a satanic set. The husband (Hugh Beaumont), a poet (Erford Gage) and a psychiatrist (Tom Conway) aid her search for the truth about her sister. Produced by horror icon Val Lewton. Dir. Mark Robson

CURSE OF THE DEMON (1957): An American psychologist (Dana Andrews) travels to England to discredit the occult beliefs of the "Demon Cult." He's aided by a feisty schoolteacher (Peggy Cummins) whose father may have been killed by the Satanists. This suggestive and suspenseful sojourn into the Black Arts is one of the most spellbinding horror films ever made. Dir. Jacques Tourneur

SWEET SMELL OF SUCCESS (1957): A desperate press agent (Tony Curtis) stoops to new depths to help an egotistical columnist (Burt Lancaster) in an emotionally repugnant, but brilliant, performance, break up his sister's romance. Suitably noirish cinematography by James Wong Howe and an acidic script by Clifford Odets and Ernest Lehman combine with an excellent cast to deliver a remarkable film. Dir. Alexander Mackendrick

DRIVE A CROOKED ROAD (1954): A lonely mechanic (Mickey Rooney) falls for a beautiful woman (Diane Foster) who wants to help him realize his dream of racing. He doesn’t realize that she’s a gangster’s moll trying to rope him into a heist. Dir. Richard Quine

HELL DRIVERS (1957): An ex-con (Stanley Baker) trying to go straight takes a job driving for a corrupt trucking company, where the bosses pit the drivers against each other in a dangerous competition that leads to higher profits and . . . death! Peggy Cummins is the saucy secretary who flirts her way through an array of up-and-coming stars—Patrick McGoohan. Sean Connery and Herbert Lom. A gear-grinding masterpiece! Dir. Cy Endfield

BACKFIRE (1950): A veteran (Gordon MacRae), recovering from multiple surgeries, tries to clear an old friend (Edmond O'Brien) of a murder charge with the help of his nurse (Virginia Mayo) and a mysterious woman (Viveca Lindfors). Dir. Vincent Sherman

INTRUDER IN THE DUST (1949): Nobel prize winner William Faulkner's 1948 novel is a high-minded piece of crime fiction, written as atonement for the mistreatment of blacks in his native South. Proud African American farmer Lucas Beauchamp (Juano Hernandez, in a memorable portrayal) is a defiant Mississippi landowner accused of murdering a white man. When the county's most prominent lawyer (David Brian) refuses to defend him, it's up to a young boy (Claude Jarman Jr.) to stand up to the vigilantes and help solve the crime. Dir. Clarence Brown

DARK PASSAGE (1947): Adapted from a story by David Goodis, this noir follows convicted wife murderer Vincent Parry’s (Humphrey Bogart) escape from jail and subsequent hunt for the real killer of his wife. Sympathetic stranger Irene (Lauren Bacall) encounters him during his jail break and aids him. Agnes Moorehead steals the show as Irene’s shrewish friend who knew Vincent and his wife prior to the murder. Dir. Delmer Daves

THE BIG SLEEP (1946): In Howard Hawks’ clever and sophisticated adaptation of Raymond Chandler’s novel, private eye Philip Marlowe’s (Humphrey Bogart) investigates the involvement of an opium addled (and nymphomaniacal) society girl (Martha Vickers) in the murder of a pornographer. He also must determine if her sister (Lauren Bacall) is helping or hindering him. Dir. Howard Hawks

THE HARDER THEY FALL (1956): A cynical press agent (Humphrey Bogart) tempted by the money, goes to work as a PR flak for the corrupt manager (Rod Steiger) of a naïve boxer. He then must decide between the dough and exposing the inhuman conditions rife in the boxing game. DP Burnett Guffey earned an Oscar nomination for Best Cinematography, Black-and-White for his work on the film. Dir. Mark Robson

HUMAN DESIRE (1954): An unhappy wife, the sultry and talented Gloria Grahame, seduces a veteran, the semi-sultry and semi-talented Glenn Ford, into helping her get rid of her husband, the not remotely sultry but very talented Broderick Crawford. Based on Émile Zola’s novel La bête humaine. Dir. Fritz Lang.

GASLIGHT (1944): A newlywed (Ingrid Bergman) fears she's going mad when strange things start happening at the family mansion where her aunt was murdered ten years earlier. Joseph Cotten stars as the handsome stranger who aids her. Charles Boyer stars as the handsome husband who terrorizes her. Angela Lansbury plays the pretty maid who may be in league with Boyer. Based on Patrick Hamilton’s Angel Street. The film won two Oscars, Best Actress in a Leading Role for Ingrid Bergman and Best Art Direction-Interior Decoration, Black-and-White for Cedric Gibbons, William Ferrari, Edwin B. Willis, Paul Huldschinsky, and earned five more nominations. Dir. George Cukor

VICTIMAS DEL PECADO Victims of Sin (1950): A dancer-prostitute (the fabulous Ninón Sevilla) rescues a baby from the garbage and is determined to raise it, despite her poverty and the threats of her pachuco pimp. The apotheosis of the Mexican cabaretera film, a combustible combo of music, dance and noir melodrama. Absolutely astounding! Dir. Emilio Fernández

A Night at The Movies: Cops & Robbers and Crime Writers 2003): A look at police and criminals in movies, through the eyes of crime writers including Lee Child, Michael Connelly, James Ellroy, Tess Gerritsen, Otto Penzler, Karin Slaughter and Joseph Wambaugh. Dir. Laurent Bouzereau

THE LUSTY MEN (1952): In this Nicholas Ray helmed Western noir, a faded rodeo star (Robert Mitchum) mentors a younger rider to help him raise the money he needs to buy his dream ranch through rodeo competition (Arthur Kennedy) and then falls for his wife, Susan Hayward. As one would expect, complications ensue. Dir. Nicholas Ray

HELL BOUND (1957): A scheme to steal a quarter of a million dollars worth of U.S. Army narcotics starts to unravel when the main backer’s girlfriend Paula (June Blair) inserts herself into the plan by posing as a nurse and falls for ambulance driver Eddie (Stuart Whitman) an unwitting participant in the heist. Also, it doesn’t help that a recovering addict is blackmailed into helping and relapses from the stress. Dir. William J. Hole, Jr.

SWEET SMELL OF SUCCESS (1957): A desperate press agent (Tony Curtis) stoops to new depths to help an egotistical columnist (Burt Lancaster) in an emotionally repugnant, but brilliant, performance, break up his sister's romance. Suitably noirish cinematography by James Wong Howe and an acidic script by Clifford Odets and Ernest Lehman combine with an excellent cast to deliver a remarkable film. Dir. Alexander Mackendrick.

Billy Wilder on the set of Sunset Boulevard screening September 1 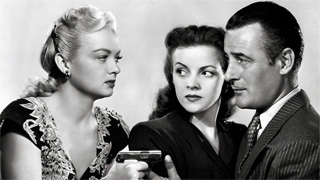 Tim Conway stars in The Falcon's Adventure on September 4

Edward G. Robinson stars in The Red house on September 8

Stanley Baker and Peggy Cummins in Hell Drivers on September 11

Humphrey Bogart in The Harder They Fall on September 18 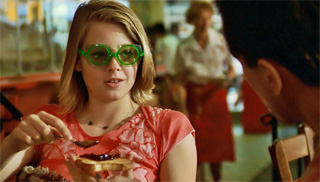 Patrick McGoogan in All Night Long on September 21

Howard Duff and Burt Lancaster in Brute Force on September 28