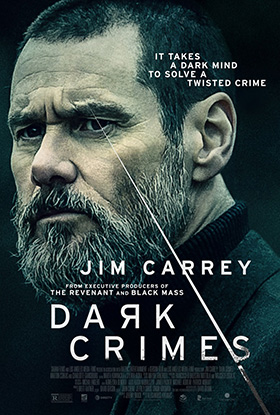 That's an understatement. Welcome to Dark Crimes, a movie that boldly sets itself a number of obstacles to overcome, beginning with two big ones: the writing and the directing. The UK/Poland/US co-production, made in 2016 and just now finding its way to stateside theaters and streaming platforms, is directed by Greek international filmmaker Alexandros Avranas, from a screenplay by Jeremy Brock (The Last King of Scotland), adapted from a non-fiction New Yorker article by David Grann. Be that as it may, the film's chief selling point, the thing that differentiates it from other European shockeroos, is the presence of Jim Carrey atop the cast list.

Carrey plays Tadek, a middle-aged Polish police detective facing job burnout. His bottled-up anger causes some of the other cops to label him a relic of "old Poland," and as he sits down to breakfast––his beard neatly trimmed, carefully setting his bacon aside from his eggs, his wife and daughter silently munching at the same table––that's a difficult label to dismiss. Predictably, Tadek has issues from his past that make this new murder case at an underground sex club emotionally loaded for him. It's perverse fun to see Hollywood's former king of clowns play such a deep mournful character. We expect him to pratfall down a flight of stairs, just to break the tension.

But the tension is persistent. The genesis of Dark Crimes is writer Grann's investigative piece "True Crime: a postmodern murder mystery." The film version borrows the magazine article's plot hook; in this case, a famous author named Kozlov (Marton Csokas) describing the unsolved murder in his book so accurately that he becomes the number one suspect. Kozlov is a sadistic, mercenary creep. His estranged wife Kasia (Charlotte Gainsbourg), a sex worker with a masochistic streak, is in the habit of lying for him. Tadek's superiors themselves seem more than a little bent, especially the grandstanding police chief (Robert Wieckiewicz). There is much to sort out.

With its pedigree—Grann, Brock, Carrey, Gainsbourg—we find ourselves hoping this sordid tale of police/civilian corruption might somehow have a bright facet that can lift it higher than its outline would suggest. We almost want to cheer it across the finish line. Carrey's performance benefits from his character's angry physicality. There's a certain amount of procedural suspense, but director Avranas doesn't grab the premise by the throat and wring something unforgettable out of it. That's too bad because we deserve a bit more for sitting through such a relentlessly dour policier. Almost every character ends the film in the same position he or she was in when it started. Where's the fun in that?