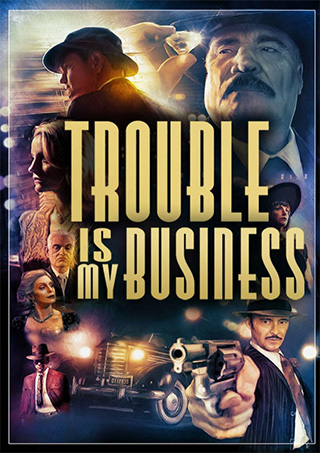 TROUBLE IS MY BUSINESS

Disgraced private detective Roland Drake is on the verge of being evicted from his crummy little office—the glass door is scarred with tell-tale signs of a partner's name haphazardly scraped off—when she slinks in. "She had a face that could launch a thousand ships and a body that would bring them back," he monotones in voice-over. Played by actor/director/co-writer Tom Konkle with the hangdog presence of a born patsy, Drake has a bottle in the drawer, a fedora perched on his head, and an attitude that reaches for world-weary resignation.

That reach—like much of the film—exceeds Konkle's grasp, but the ambition of Trouble is My Business is impressive. This isn't a Dead Men Don't Wear Plaid spoof but a self-aware tribute that embraces the look, style, and attitude without quite nailing the essence. This is a film where a smart-talking paperboy hawks the late edition in dark alleys, shouting "Extra, extra, read all about it!" and swapping scuttlebutt with our detective, before melting back into the shadows.

The title is borrowed from Raymond Chandler, but the twisty little mystery—developed and scripted by Konkle with co-star Brittney Powell (the slinky blonde)—is an original as convoluted as anything from the 1940s. It begins with a search for a missing millionaire father, takes a sharp turn into a murder frame-up, and twists through a plot involving a stolen diamond with a "Maltese Falcon"-like backstory, a little black book with the dirt on police corruption, Russian mobsters, a gleefully corrupt cop (Vernon Wells), a cross-dressing butler, and twin sisters (both played by Powell) who play upon Drake's rumpled chivalry.

Konkle has the details down, from the dust hanging in the air of his office like a haze of dashed dreams, to the streaks of perversity running through the pool of suspects. There are obligatory shadows cast by half-open Venetian blinds and lights smears across rain-slicked city streets. The expressionist CGI cityscape of 1940s Los Angeles gives the visual canvas a scope beyond its budget and looks no less realistic than the cardboard skylines of some of the old studio pictures. And he clearly loves the genre. One street scene features a theater marquee with the title "Build My Gallows High."

It's too long at just under two hours and the performances bounce between intent caricature and knowing lampoon, but the commitment to the project is as authentic as its affection for the genre. Trouble is My Business is a pastiche that pushes its self-awareness to the edge of parody, but it's so lovingly steeped in its inspiration I'm willing to overlook Konkle's sometimes club-footed execution.