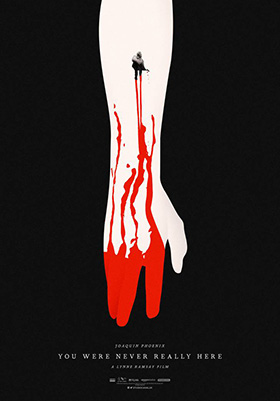 YOU WERE NEVER REALLY HERE

In the cinematic netherworld imagined by Lynne Ramsay, writer-director of You Were Never Really Here, any crime involving children—now or in the dimly remembered past—reverberates through the air to poison all that it touches, infecting everything, including the visual language of the film itself.

The 48-year-old Scotland native's Morvern Callar (2002) related the inner turmoil of a young woman who believes she deserves better than she's getting, with a disturbingly brilliant performance by actor Samantha Morton.

2011's We Need to Talk About Kevin featured tightly wound mother Tilda Swinton being slowly driven mad by her "bad seed" son in the purest of melodramas. For Ramsay's protagonists, psychological unrest is a permanent condition resulting from a damaged youth. So, when we meet Joaquin Phoenix's Joe, the main character of Ramsay's You Were Never Really Here, we instinctively brace for the worst.

With his scarred limbs and slow-moving bulk, Joe inhabits his little corner of hell as a sort of guardian of fallen angels. His line of work, as near as we can make out, is to rescue kidnapped children—usually little girls, from the clutches of fiends who would do them harm. He operates as a private, non-police-affiliated bounty hunter for parents who cannot, or will not, trust the authorities. Joe's M.O. is deceptively simple: he gets leads from hired creeps and then hunts down other creeps, essentially using only a ball-peen hammer (backed up by a handgun) and a roll of duct tape. The job weighs heavily on Joe. It's a sick world. 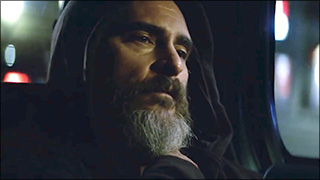 One day, Joe finds out about a kid named Nina (Ekaterina Samsonov), whose father, a well-connected politician (Alex Manette), wants his missing daughter returned with maximum pain inflicted on the man who grabbed her. For this, he will pay $50,000. Watching Joe line up his assignment, it occurs to us that, considering his drug addiction, his military nightmares about desert combat, and his obsession with deflowered children, Joe is in several ways as repugnant as the predators he kills. If it weren't for the fact that the film was made by a woman, we'd be suspicious that Joe's righteous rescues of innocent girls was a queasy-making extension of the much-denounced "male gaze." But no, You Were Never Really Here is an equal-opportunity spreader of gloom. Its window into despair is open to all.

One scene in particular illustrates Joe's tormented point of view. Walking down a New York City street, he passes a group of carefree young Asian women, perhaps tourists, laughing and clearly having a good time. In their unwary way, they ask Joe to take their picture. Instead of a standard viewfinder image, the visuals begin to twist and turn in a troubled kaleidoscopic montage, intercut with a shot of dead Asian women piled in the back of a van, ostensibly a part of Joe's past. Or is it a fantasy? It's a disturbing montage, transforming the women's fun day out into Joe's ongoing nightmare.

Joaquin Phoenix (The Master, Two Lovers, Gladiator) has long specialized in portraying disturbed characters, and Joe is one of the saddest. Leave it to filmmaker Ramsay to tickle out the child in him in the random and spine-chilling way he pursues his mission. Ramsay, Phoenix, and actor Judith Roberts (in a startling turn as Joe's mother), are aided and abetted in presenting their haunted low-life panorama by the editing of frequent Werner Herzog collaborator Joe Bini, and by yet another penetrating music score by erstwhile Radiohead guitarist Jonny Greenwood (Phantom Thread, Peaky Blinders). In their hands, lumbering Joe and his hammer seem like loose fragments of a fairy tale told by someone full of hurt. You Were Never Really Here is not for everyone, but its wounded compassion is undeniable.

Kelly Vance saw 99 River Street on TV at age eleven and, ever since, has had an irrepressible urge to beat up Jack Lambert. Kelly is a member of the San Francisco Film Critics Circle.